Journey
We were kindly offered a free weekend in a friend’s holiday home (caravan) at Beeston Regis, on the Norfolk coast, just along the coast from Cromer next door to Sherringham. So on Friday Mrs O-n-G and I headed out along the A47 to Kings Lynn and up the A148 to Beeston Regis.
During a quick visit into town on Friday morning for bits and bobs to take with us, I was lucky enough to get the OS Explorer 252 map, Norfolk Coast East in WH Smiths.
On Saturday we went out without much of a plan other than walk to Cromer. From the caravan we headed towards the sea and turned right, walking east along the cliff tops. It was a grey and misty day with a cold wind, the sea was full of white horses and big rolling breakers. The cliff top edge was well fenced off for safety with frequent notices warning of the erosion, the instability of the cliffs and the danger of getting to close to the edge. 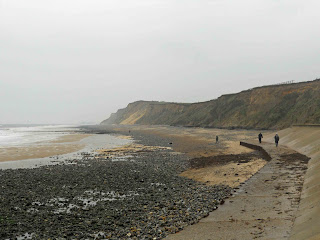 At West Runton we dropped down the road to the slipway and headed off along the beach. Please check tide times and state before walking along any beach. From the shore looking up it becomes clear why the cliffs are eroding, basically because they are, at a guess, largely formed of clay with some weak sandstone. 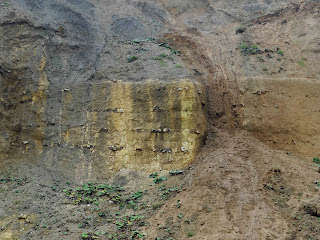 As we moved along the beach stopping to pick up stone of interesting shapes and or colours, and looking in rock pools we could see where, in the recent, past the cliffs have collapsed leaving water pipes and drainage pipes exposed. In several places, we saw concrete slabs that had once been the bases for mobile homes to stand on, lying half way down the slope and protruding out at the top of the cliff. Later we came across a World War 2 Pill Box, constructed in about 1940 as a defence against possible invasion, now laying on its side nearly buried by sand. I paced out the distance from the pill box back to the base of the cliff and estimated that the cliff here had retreated some 50 metres in 70 years. 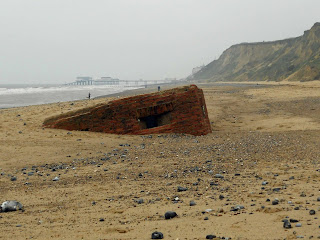 On reaching Cromer we bimbled along the Promenade and eventually ended up on the pier watching the fishermen, while down on the beach we watched the surfers including a group of youngsters being taught. 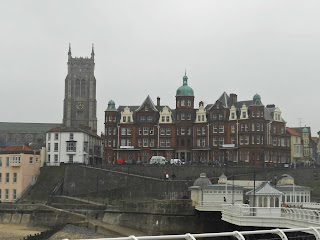 Feeling colder by the minute we walked up past the Church and into the town stopping for  hot drinks and toasted sandwiches. Feeling refreshed we had a look at the map and worked out a route back to the caravan using the Norfolk Coastal Path. The chap running the Café gave us some directions to the A149 where we could pick up the NCP, but could only explain the way as if driving, when told we weren’t in a car he could only point vaguely and say that way.

After a short trip around Morrison’s car park, the railway station “North Norfolk Railway” and the back of Halfords we went up the A149 into Sandy Lane, and follow the Norfolk Coastal Path ‘Acorn’ signs across Stone Hill, along Cross Lane and into a long stretch of woodland, passing a couple of nice looking caravan and camping sites and working our way uphill to cross a different Sandy Lane, south of West Runton. 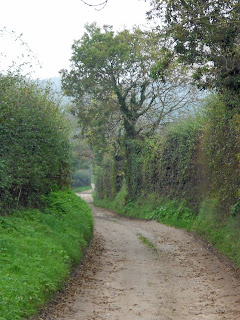 Here we crossed into Roman Camp Wood, the high point of the walk at 102m, with its pay and display car park and a very nice interpretation board which carefully explains that no Roman remains have ever been found here. From here it was follow the NCP through more woodland gradually dropping down off the hills out into fields, past Beeston Hall School and across the road to the caravan. 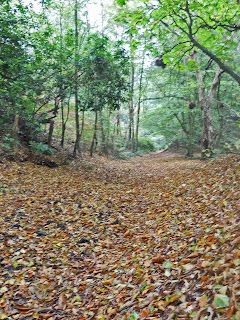 A very varied walk and despite the grey weather very pleasant, although I have to say that due to the high hedges in the rural bits, lots of trees in the wooded bits and general lack of elevation there were few good views on the Norfolk Coastal Path more a sort of few good glimpses.

For us it was just the first taste of somewhere new, although we had visited Cromer for a day with our children some 30 years ago during a holiday touring with the caravan. And now it is somewhere we will come back to, to explore further.
Posted by Mike (aka Old-n-Grey) at 14:16 No comments: