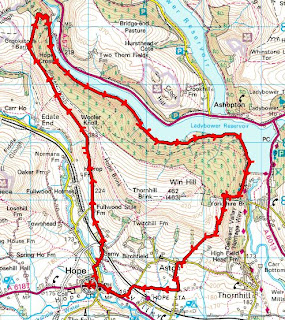 Route
These notes are provided to enable the walk to be plotted on a 1:25,000 map.
Almost opposite the car park and toilets in Hope take the footpath North through the housing and past the school. Turn right behind the school heading across the Edale Road, under the railway line and up to Fullwood Stile Farm. Follow the road, then track (Roman Road) to Hope Cross. Proceed on to the cross tracks, turn right heading down in the direction of Hagglee Ford. Pick up the track heading SE along the reservoir all the way to the Dam.

At this point our plan was to go on to Yorkshire Bridge and follow the paths across the fields south of Aston via Hallum Barn and on to Hope. Somehow we turned right up Parkin Clough,  turning South at the first footpath towards Thornhill Carrs then downhill to Aston Hall, by road to Hallum Barm and across the fields to Hope.

April & May, Lost Months
It had been fairly easy to accept the idea of redundancy and taking early retirement which was ‘offered’ to me in November last year, effective from 31 March . I anticipated lots of free time and being able to go walking when I wanted to. Naturally it didn’t work out that way, we never really expected it would, and  April and May has just flown by without a proper walk, other than a few short local strolls and the obligatory dog walking.

The main set back was that with redundancy my company lease car finished and we realised that from now on we would have to make do with only the one car. As Mrs G is likely to be working for a few more years yet it was only natural that she should use it for getting to and from work.

Then I spent hours trying to sort out Mortgages, Pensions, Insurances, bank and credit card accounts along with a dozen other things, each of which required multiple phone calls, emails and letters. The weather was crap week after week. Then there was the decorating that had been waiting months, in some cases years, for me to finish and of course there was new decorating to do, plus the gardening.

We bought a second hand caravan from a reputable dealer, who total failed to carry out the promised ‘extensive’ pre delivery checks resulting in two visits back for works and the loss of the van for three weeks

On the upside I have rediscovered public transport, and we have worked out a form of car sharing. Contrary to earlier expectations I feel that my walking will be more limited, but time will tell. However, I have am in the process of planning a number of solo mid-week walks based on the various bus routes from Loughborough, which will be interesting!, especially if I get my timing wrong.

Also with the caravan we hope to be able to get away for holidays and weekends and walk in more far flung places. In addition Andy and I are planning a few multi day (possibly backpacking) walks including in October a walk across Mallorca (carrying all necessary kit but not backpacking), which will be fun.

Journey
So 0830 Monday 4th June Andy and I were bombing up the M1 on the way to Hope. The morning was chilly and overcast although the forecast had sounded quite good it looked for quite a while as if it could go either way. We stopped at Morrison’s in Chesterfield for food, top service and sarnies.
Then dropping down towards Baslow we got stuck behind convoy of ‘them’, 10mph less than the limit regardless of quiet roads, flinch and brakes at each oncoming car, curve or warning sign etc. all the way to Hope, thank god we weren’t going to Edale.

Big signs in Hope proclaiming Beer Festival but against all expectation we were able to park on road only a few yards beyond the Car Park, great.

With mountain bikers getting sorted out and several groups of walkers getting kitted up the place was pretty busy. Within a few yards of stepping off the Castleton Road and into the housing beyond we were walking through a quiet  field, surrounded by houses,  but occupied by a couple of sheep and some very free range chickens clucking about. 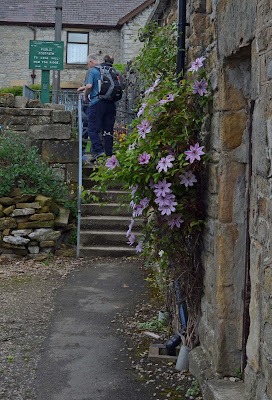 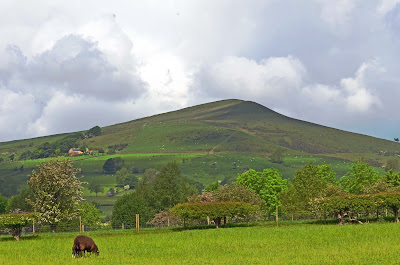 Once across the Edale Road and under the railway line it’s about three solid miles of uphill walking with views up the Edale Valley and the hills that define it opening up all the way. We’ve done various versions (some longer) of this walk before and I certainly feel that it is one of the top ten walks in the Peak District. Walking up to Hope Cross from Hope makes a wonderful start for this route and the alternatives that lead from it. As we climbed, we stopped to take photographs and occasionally to watch the trains running to and from Manchester, Norwich or Skegness. 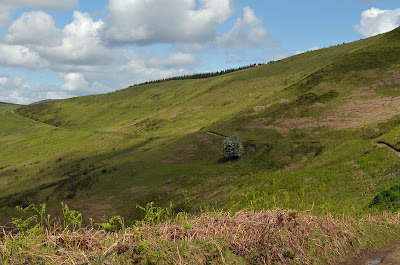 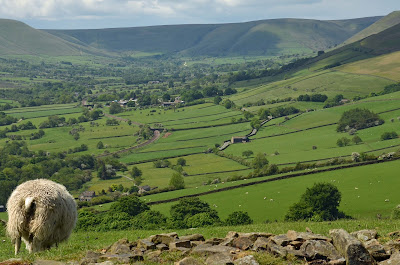 Gradually we overhauled a bunch of DOE’s who were on the third day of their Silver practice, and despite being cold and wet on the previous days they were in good spirits, but looking forward to the minibus, even if they weren’t entirely sure where they were going to meet it. 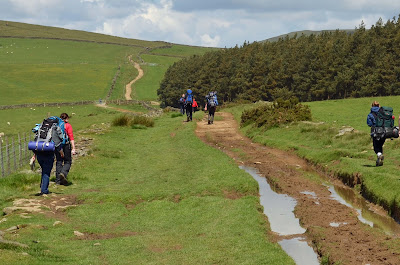 Dropping down through the thick woodland down to where the River Ashop runs into the Ladybower is great, if a little rough going at times. 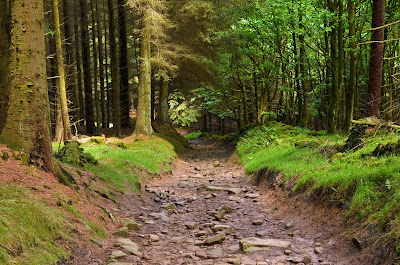 Reaching the valley bottom and turning south following the track undulating and meandering above the river/reservoir you get terrific views down the valley, with the rocky top of Crook Hill, the woodlands and the water and eventually the viaducts carrying the A57 and the A6013. 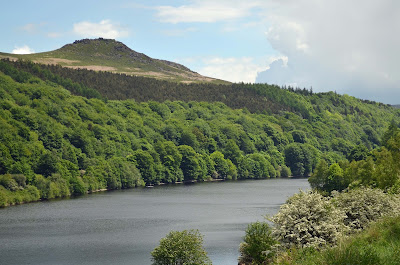 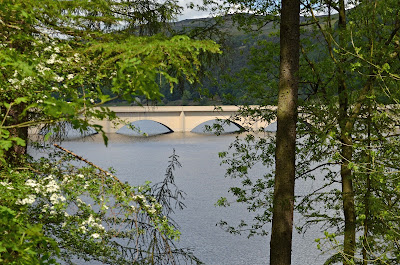 As we headed east we met many more walkers and cyclists, plus the occasional fisherman. We also met several families walking and cycling which was nice it see. At the start of the uphill section opposite Crook Hill we were stopped by a young Asian couple asking how much further was it to the Derwent Dam. We explained that unfortunately they were on the wrong side of the wrong reservoir, showing them on our maps, they had none, so we advised that they head back to their coach at the Ladybower Dam. Last seen they were still heading west.

For information on the Ladybower and Derwent Dams and their history see: http://en.wikipedia.org/wiki/Ladybower_Reservoir  http://www.peakdistrictinformation.com/visits/derwentdams.php

At the dam we stopped to take photos and look at the road, we know well, that climbs across the face of the hillside opposite, bending around the end of Bamford Edge and on up almost to Stanage Edge.The photo below is a tarted up image of the reservoir overspill  pipe, west side.

We had intended to follow the Derwent Valley Heritage Way and swing west beneath Aston and on to Hope. Unfortunately, we branched right far too soon along a pleasant forest path which suddenly transformed into the near vertical rocky, slippery, tree root ridden, hell path that is Parkin Clough. I have been down it three times in the past and swore never to do so again and never to go up it. Now I have, I promise I will not again. 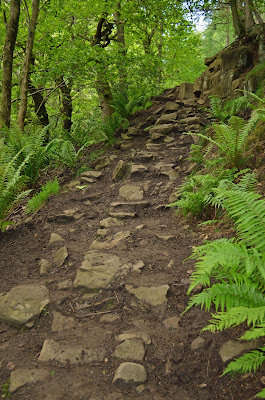 Once we got our breath back and the sweat cooled the walk across to Thornhill Carrs and down to Aston Hall was beautiful and the question of who made the mistake that lead to Parkin Clough was soon dropped!. 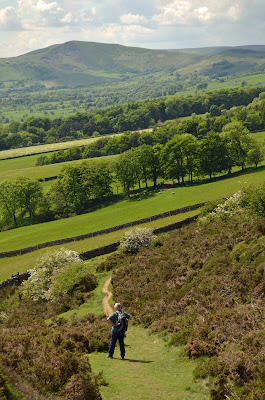 Back in Hope the Beer Festival was in full swing so we dropped our kit in the car and drove up to the Cheshire Cheese Inn (http://www.thecheshirecheeseinn.co.uk/) for a well-deserved pint and a chat with locals and some other visitors. A super walk, very much enjoyed. I’ve promised to take Mrs G on this walk, one day.