Over the past month good walks have been few and far between. In early November I took two of my granddaughters on a walk around the local footpaths, on the way we did a bit of geo caching or gee-up catching as the youngest called it. It was great fun, we pretended it as a treasure hunt (with plenty of pirate growls and pieces of eight from granddad) they found 2 out of the 3 caches we were after. This wasn’t too bad as we’re in a rural area and the iphone’s gps accuracy out here is not the best. The biggest problem of the day was persuading them that once they had found the treasure, they couldn’t take the treasure home. No tears though.

Having had a good dose of snow on 27 November, Mrs O-n-G decided that we’d go on a nice walk on the Sunday. An hour or so on the internet and memory map and we had a 9 mile walk starting from home to which I added 4 geo caches. 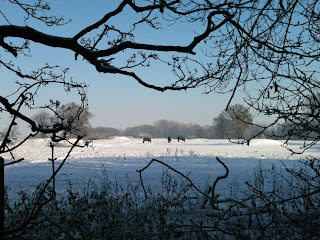 Sunday morning was lovely, cold, not much wind and sky was bright blue and sunny with 3 to 4 inches of snow over everything. It never ceases to amaze me how the snow changes the way everything looks, a rough old grass field becomes wonderfully smooth and the trees appear to be covered in new white blossom and the branches turn in to silver.

We tramped along footpaths across the field behind us and along the lane to the next village where we failed find our first cache, possibly because it was at ground level and on one side of the hedge the snow had drifted well into the hedge line. Moving on we walked through a series of small fields, making sure at each stile or gate that there were no cows in the field, as since a man out walking was killed by a bull and heifers over Stanford on Soar way, Mrs O-n-G is even more scared of them I can see some difficult diversions ahead. Later we watched a man fly a model jet plane, steering it through a whole range of tricks and stunts, very skilled. 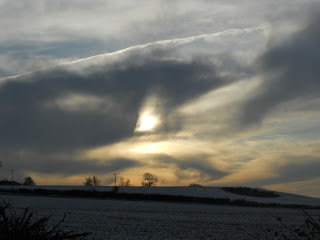 I used my gps to find the next cache, it was tucked away off the main path along a track I didn’t know existed, despite a few years ago having used that area for training runs. The gps took us right up to within 3 metres of the third cache which was extremely well hidden in a tree. I’m a bit stumped here as I want to describe the situation but don’t want to give anything away, so I’ll say now’t. By now the sun was fading and it was getting decidedly colder so we headed back home by the shorter route, missing out on the fourth cache, rushing home to hot chocolate with cream and marshmallows. 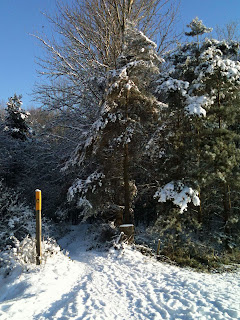 Last Friday I had a day off and after finishing a few jobs took my camera off around the area taking 82 pictures of white covered scenery, some of which will appear on the Mrs’s craft Christmas Cards. Guess who gets all the printing, trimming and sticking to do. 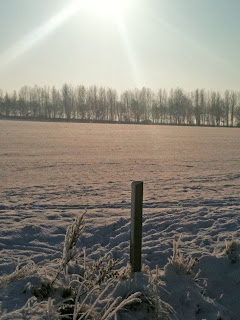 On these last two walks I wore my Salomon 3D Fastpacker GTX mid boots (or some such name). I bought them just over two years ago, I’ve only worn over winters as I much prefer approach shoes most of the year. Wearing them on Sunday I had forgotten how comfortable, supportive and light (990g a pair) they are. I was also pleased with how well they worked in the conditions, they also felt

Intrestingly these are the only boots or approach shoes I have worn in the last six years that I have not had to put either Superfeet of the Montrail insoles into. Last spring I thought they had started to leak through the tongue area but in the snow there has not been any leaking. I guess snow may not be a good test of waterproofness so I’ll have to wait and see. But with the Smartwool socks I was warm and dry. I might give the 3D shoes  (without GTX) a try in the spring.