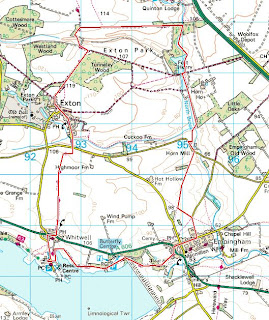 Date : 18 September 2011
Area : Rutland
Walk : Whitwell, Exton Empingham , Rutland Water
Start At : Car Park South of Whitwell
End At : Return to start
OS Sheet : Explorer 234
Start Grid : SK 9234 0830
End Grid :
Distance (M/k) : 10m / 16k
Ascent (ft) : 633
Descent (ft) : 633
Route
These notes are provided to enable the walk to be plotted on a 1:25,000 map.
From the car park return to Whitwell, at the main road turn right to the Viking Way sign before the pub. Follow the Way signs north passing through Exton to Grid 9299 1290, take path east. In Osprey Wood cross the embankment take the path on right down steps follow past Fort Henry Lake to Horn Mill. Go downhill to a path on the right to Empingham. Where the paths cross on the hedge line turn left to Loves Lane, then right to the Village. At the A606 cross straight over into a small lane to a path on the right across fields to Rutland Water and along the perimeter path back to the car park.


Journey
As we drove towards Oakham and Rutland Water, the sky was overcast and the wipers were wiping intermittently, by the time we got to Whitwell it was dry and the sky to the south and east was clearing.


The Anglian Water car park at Whitwell costs £3 a day to park which is not bad considering the facilities available, toilets, café, cycle hire, adventure park and an outdoors shop.


The first section of the walk was along part of the Viking Way, a long distance walk between Oakham and the Humber Bridge (143miles).


Leaving the car park to walk up the hill into Whitwell we noted that there was a distinct autumnal feel/smell to the air. The path from Whitwell to the village of Exton starts along the drive way to the car park behind The Noel Pub,  keep to the left hand side to the top then over the stile and into the fields beyond. 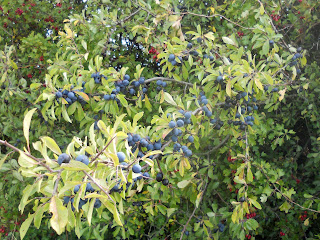 This is a wide open farming countryside with attractive views over field to woodlands with the occasional house, barn or church spire in the distance. The path was a wide well mown field margin leading the way gently uphill, past hedgerows full of red and fat black berries. We gradually reached the crest of the ridge and descended into the village of Exton. In the short time since we left the car the air temperature had risen from 18 to 23 C. 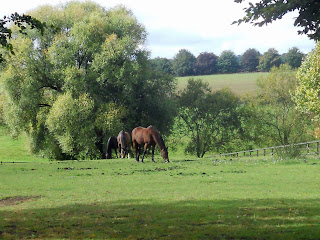 Exton is a village of two halves the lower side is more modern housing while higher up the hill, neared the Hall, the houses are much older, more picturesque with plenty of stone and thatched cottages. 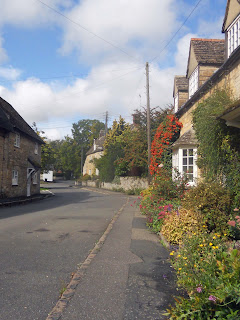 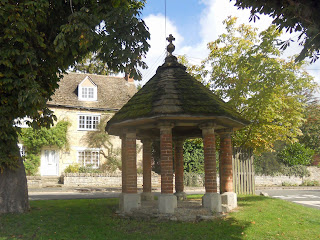 Passing by Pudding Bag Lane we continued up the Viking Way on Exton Estate roads, as we walked we were amused by a number of variously worded signs, set just off the path, all warning of great dangers if we dared to step off the right of way.
Later we passed a field full of cows and youngish calves, with a Danger Bull sign pinned to the stile on the far side of the field only, which is worrying. Thankfully we did not see a bull in the field. 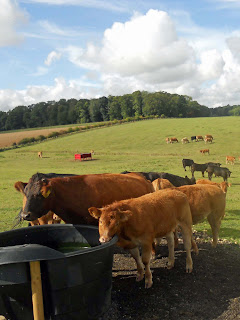 North of Tunneley Wood we walked down into and up the far side of a large trough nearly 2k long, perhaps 300m wide and 25m deep. We turned east walking along its north side, where we stopped for lunch. I assumed that this feature was not natural and thought it possibly an old ornamental lake or river. 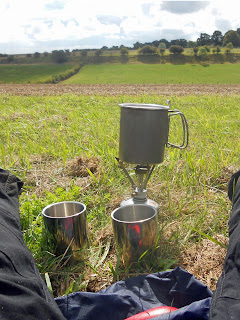 Back home, on the internet, I found out that it was the remains of an ironstone quarry and/or was the route of a railway line that ran clockwise right around  Exton Park and village, serving several ironstone quarries before heading off to Cottesmore (see Ironstone Tramways ) This perhaps explains some of the warning signs earlier in the walk as the map shows disused workings in that direction.
Nevertheless, the quarry and railway are gone and the remains have merged into the agricultural landscape with little sign of what was here only fifty years ago. We will have to come back and walk over several of the footpaths in the area one of which is marked on the OS Map as passing across one of the disused workings. 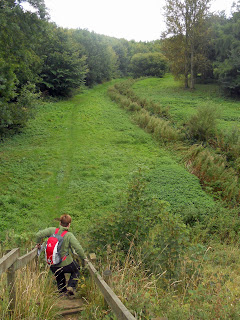 Turning south down some steep rough steps we walked into another world, a long tree lined ‘river’ valley that was enchanting to wander through, so peaceful and quiet. We stopped several times to listen, other than an insect buzzing or bird song it was silent. Surprisingly this was also on the line of the quarry railway.
Fort Henry Lake was stunning in the sunshine, the autumn colours starting to appear, the swans and cygnets on the lake, the last of the water lilies and Fort Henry. 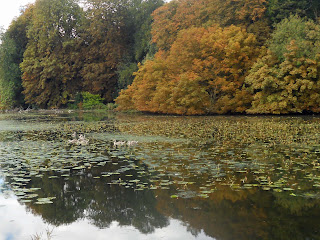 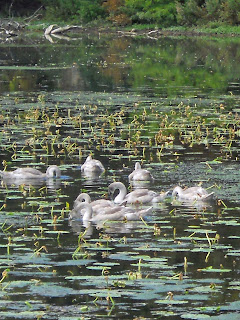 Fort Henry is an 18th century folly, The estate website says of it: “The interior boasts the most elaborate plaster work and is a dreamlike setting for a summer lunch, dinner party or photo shoot, with only the swans to watch in this tranquil setting”. (See Exton Estate) 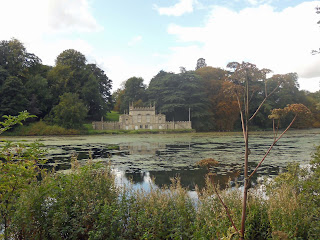 We wandered over the medieval village of Horn, which showed up quite well, and the lovely walk continued down the valley to the Trout Hatchery at Horn Mill where we watched the trout jumping and the spinning paddles aerating the water. The air temperature was now 29 C. 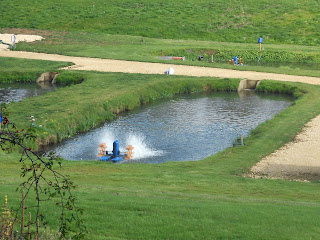 As we headed for Empingham, climbing steadily we met the conundrum of a ploughed field with no way marker in sight and no footprints to show the route, so we took the field edge option. Setting off anti clockwise we ended up walking three sides of the field. The next field was also ploughed, this time I checked the map.
In Empingham we wandered around looking for a shop, anything selling ice cream, without luck, the pub was packed, so we pressed on to Rutland Water and had a nice big 99 cone in the shop/cafe at the car park at the Butterfly Centre. 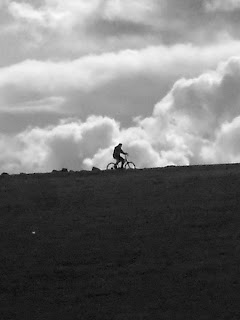 This was one on of the most satisfying walks we’ve done in some time, it was a journey, it was interesting, it was warm and sunny, which does make a big difference, we both enjoyed it. It rained all the way home.
Posted by Mike (aka Old-n-Grey) at 08:17 No comments: 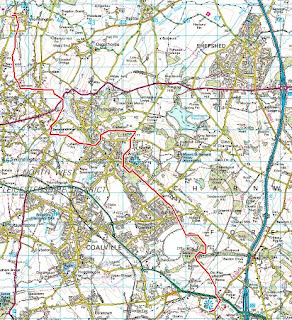 Date : 11 September 2011
Area : Leicestershire
Walk : Ivanhoe Way Day 3
Start At : Worthington
End At : Stanton under Bardon
OS Sheet OS Explorer 245
Start Grid :4049 2060
End Grid : 4676 1115
Distance (M/k) :10.2 / 16.3
Ascent (ft) : 1080
Descent (ft) : 725
Route
These notes are provided to enable the walk to be plotted on a 1:25,000 map.
The Ivanhoe Walk is clearly marked on the map
Journey
We originally started out on this final leg of our Ivanhoe Way walk on Saturday 13 August but a couple of miles in a domestic problem brought the walk to a halt a rapid return to the car and a dash home. Thankfully things were soon sorted out but a day was wasted. Since then I have been embroiled in some fairly extensive decorating which has kept us from walking for nearly a month.
The first section from Worthington to Gelsmoor where we bailed out, was pleasant enough through a small housing estate across fields and along their edges until we came out on to the B5324, Rempston Road at Gelsmoor.


We resumed the walk by parking a car in the village of Newbold and wandered around to Rempstone Road passing The Gelsmoor Inn and joining the Ivanhoe Way at the first of the many, many stiles we would cross during the next 8 miles or so.

In this first field there was a bunch of very curious blonde and red headed young ladies, who crowded us a little more than was pleasant and lead to the first navigational faff of the day, unfortunately not the last. Having sorted our mistake out, we pressed on passed Griffydam, around Peggs Green and across Swannington Moor towards Whitwick. 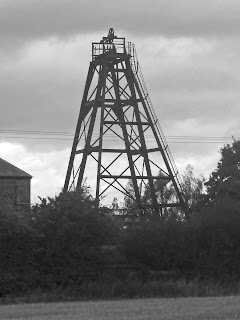 The land around these villages was for several hundred years the site of a half dozen collieries, plus the railway lines and industries associated with coal mining, we passed the headstocks from one of the pits as we walked. Indeed other than this remnant we saw little indication of the industrial past in the landscape, only fields, trees and hedges.

The numerous small fields, stiles and slightly strange waymarking caused several stops to check or correct minor navigation errors all of which slowed us down and broke up the rhythm of the walk which made this section of the walk less than enjoyable. 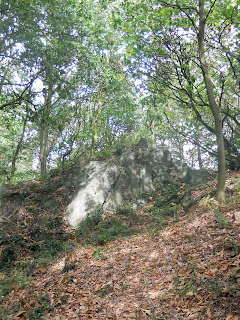 In Whitwick we walked down the wonderfully named Dumps Road to The City of Three Waters, which led us to the lovely Cademan Woods from here the walk took us through several housing estates and a stretch of woodland before skirting around Bardon Hill and quarry, across to Rise Rock Farm out onto the A511 and down to the the small car park to the north of Stanton under Bardon. 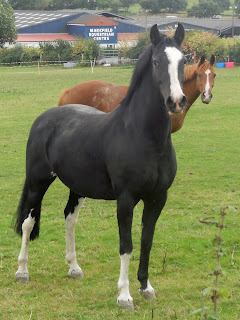 All in all we found much of this portion of the Ivanhoe Way walk disappointing and unsatisfying, but the dull, windy overcast day did not help. If I were to offer any advice to anyone contemplating walking the Ivanhoe Way, I’d say do it anticlockwise and possibly get the Whitwick, Ashby, Measham part done first.
Posted by Mike (aka Old-n-Grey) at 11:41 No comments: